“Stravaganza” is a prestigious 24m motor yacht with elegant, sporty lines is a shining example of the Maiora 24s model, built by Maiora Yachts in Italy. Stravaganza was launched in 2008 and this motor yacht has only ever been used privately, operated solely in the Mediterranean. She has a strong hull, a slender curving bow, and decks laid with high quality teak.

Stravaganza’s spacious interior offers a wood-panelled lounge area in the main salon with two sofas, as well as a dining table for eight. There’s a large flat screen television and an integrated Bose audio system, which also runs to the deck areas. Glass sliding doors connect the salon to the main aft deck.

Moving forward to the well-equipped galley, which is positioned between the salon and the bridge, there’s plenty of storage and integrated appliances from leading brands.

Stravaganza has a modern and light bridge, newly refinished in tan brown leather, and here, alongside the comfortable Captain’s chair and state-of-the-art instrument panel, is another little bank of seating with a table. Another helm position is found on Stravaganza’s flybridge, where there’s also a large table for dining al fresco, a barbecue and sink unit, fridge with icemaker, and a huge cushioned sun pad.

The Maiora 24s model offers accommodation for up to eight guests across four en suite cabins, comprising a master double with a pale grey colour scheme and with Japanese-style screens across the portholes, a VIP double and two twins – each with an additional Pullman berth. Stravaganza also has separate crew quarters for four, with one cabin in the bow and the other in the stern, both with direct access from the deck.

The tender is stowed to aft up on the flybridge, keeping the decks clear for socialising and entertaining, and the tender is deployed and recovered via its crane. To aft, an extended transom offers a large and stable platform for easy access to and from the water.

The Maiora 24s can carry almost 9,000 litres of fuel and has an impressive top speed of 28 knots, with a 24 knot cruising speed. Her well laid out engine room boasts an impressive 2m of headroom and having recently benefitted from new exhausts, batteries and hydraulic systems, Stravaganza has also undergone an intensive service to prepare her for a new owner.

Tender stowage on the flybridge 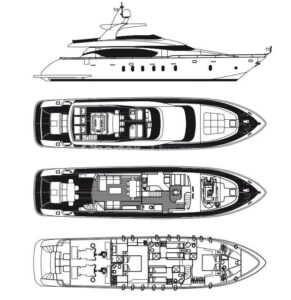